Charles has been playing with a Pro+ for the past two season and is having a great start to this season with a 5 points game (1 goal, 4 assist) in a 5 to 1 win last week and help his team tie the next game in a 4-4 draw after trailing 0-4 .

This kid was the only player wearing Brain Pad and now he will  have 10 of his teammates joining him. 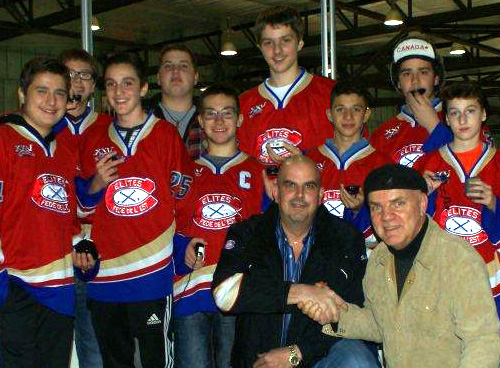 Charles father, Serge Boutin who works at the Radio-Canada ,was getting a new model  for his son from Vic Theriault after playing two   full season wearing the Pro +.  Word got out how much these players like and I was ask to meet the coaches and parents who all agreed to participate in a research program to see how many stick with that model with team president Sylvain Petelle and coach Benoit Courchesnes .This will  give the product a serious look and try out in hard hitting kids hockey.

We now will follow 11 kids from the Elites Bantam “CC”  in the Federation de L’Est Hockey who  agreed to give it a serious try and must be congratulated for being pro active in the fight to reduce tooth and jaw-base of skull injuries in the fast game of hockey.

This site uses Akismet to reduce spam. Learn how your comment data is processed.